July 14, 2017 – Locally sourced products are a key part of Food Lion's heritage, and that strong relationship with close-to-home producers is at the center of the U.S. brand's highly successful "Local Goodness" marketing and merchandising campaign. Launched in North Carolina in 2016, the campaign is being expanded this year to three other states: Georgia, South Carolina and Virginia.

"With market trends toward fresher, healthier eating, our customers increasingly appreciate local produce not only because of its perceived freshness, but because buying these products supports their communities," said Chris Dove, Director of Produce Category and Merchandising for Food Lion. "It's clear that local assortment is a significant contributor to our emotional connection with shoppers."

Indeed, the "Local Goodness" campaign had an immediate positive impact in the summer of 2016, with produce sales on local items in North Carolina stores up almost 22% and movement rising 20%.

Given those outstanding results, Food Lion is expanding the campaign – which features the new tag line "Heart and Soul of Our Communities" – to include the Meat/Seafood, Deli/Bakery and Center Store departments. In addition, though the primary focus is in North Carolina, "Local Goodness" produce items will be introduced in Georgia, South Carolina and Virginia.

Food Lion's commitment to local products – defined as those grown or produced in its operating area – notably began many years ago with a North Carolina soft drink called Cheerwine. The number of local products has steadily increased since then to include other well-known North Carolina businesses such as Mount Olive Pickles, Critcher Brothers Produce, and Patterson and Cottle farms. 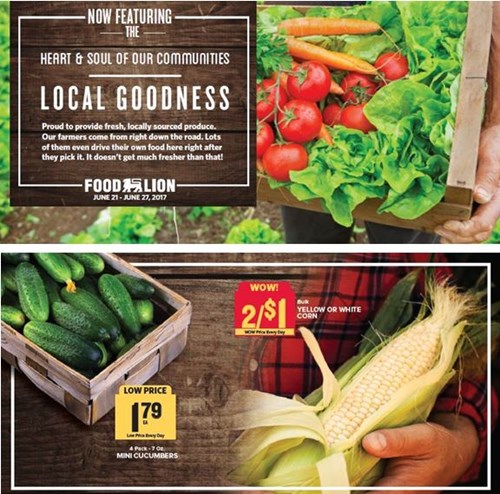