The company, a leader in supermarkets and e-commerce with 22 market-leading local brands in 11 countries, was formed from the merger of Ahold and Delhaize Group. The merger was effective on July 24, 2016, after the end of both companies' second-quarter reporting periods.

Dick Boer, CEO of Ahold Delhaize, said: "We have started our new chapter as Ahold Delhaize with good momentum, with these two strong sets of pre-merger results. Building on our solid financial foundation, common values and great local brands, we are driving ahead with full energy to deliver even more for customers and communities, associates and shareholders. We look forward to continuing to shape Ahold Delhaize, with a strong commitment to delivering great food, value and innovations for customers across our 11 markets, both in stores and online." 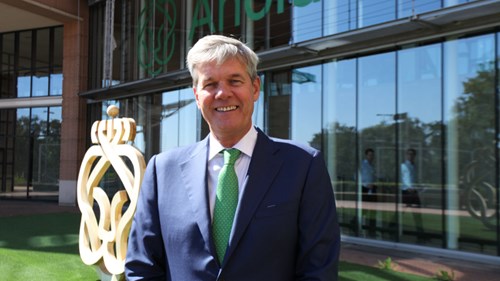 Starting from the third quarter of 2016, Ahold Delhaize will report its quarterly financial performance for five business segments: The Netherlands, Belgium, Central and Southeastern Europe and two reporting segments in the United States. To provide a comparable base, pro-forma historical quarterly segment information will be published on October 6, 2016. In this pro-forma information, we will exclude the financial impact of divestments, as well as merger transaction costs. We will include the impact of purchase price allocation, as well as other effects, including the effects of the alignment of corporate costs allocation and accounting policies.

As announced by Ahold and Delhaize Group on July 14, 2016, 86 stores will be divested in the United States, as part of the approval of the U.S. Federal Trade Commission. Proceeds from these divestments  are estimated to be $174 million, resulting in no significant divestment gain or loss. These 86 stores represented $1.4 billion of net sales and $88 million of underlying operating income in 2015. In addition, Ahold Delhaize expects to divest another 10 stores in the Richmond area.

In Belgium, Ahold Delhaize will divest 13 stores, as part of the approval by the Belgian Competition Authority, as announced on March 15, 2016.  These 13 stores represented €94 million of net sales and €10 million of underlying operating income in 2015. In addition, Delhaize Belgium also announced the sale of pet specialist shop chain Tom&Co on June 27, 2016.

We are confident that we will meet our synergy target of €500 million on an annual run-rate basis by mid-2019. In 2016, synergies are expected to positively impact operating income by €30 million in the second half of 2016.

Our free cash flow for 2016 is expected to be €1.3 billion, including expected capital expenditure of €1.8 billion, €0.2 billion of transaction, integration and Delhaize Belgium's Transformation Plan costs and estimated cash flows from divestments of €0.1 billion.

We plan to hold a Capital Markets Day on December 7 in London, where we will provide an update on our future strategy framework for Ahold Delhaize, share more details on integration and synergies, and give guidance on our capital structure going forward.

Notes to this report

This communication contains forward-looking statements, which do not refer to historical facts but refer to expectations based on management’s current views and assumptions and involve known and unknown risks and uncertainties that could cause actual results, performance, or events to differ materially from those included in such statements.  These statements or disclosures may discuss goals, intentions and expectations as to future trends, plans, events, results of operations or financial condition, or state other information relating to Ahold Delhaize, based on current beliefs of management as well as assumptions made by, and information currently available to, management.  Forward-looking statements generally will be accompanied by words such as “anticipate,” “believe,” “plan,” “could,” “estimate,” “expect,” “forecast,” “guidance,” “intend,” “may,” “possible,” “potential,” “predict,” “project” or other similar words, phrases or expressions.

Many of the risks and uncertainties relate to factors that are beyond Ahold’s control. Factors that could cause actual results to differ materially from those in the forward-looking statements include, but are not limited to, the risks that the new businesses will not be integrated successfully or promptly or that the combined company will not realize the expected benefits from the transaction, Ahold Delhaize's ability to successfully implement and complete its plans and strategies and to meet its targets, risks related to disruption of management time from ongoing business operations due to attention being required in connection with the integration, the benefits from Ahold Delhaize’s plans and strategies being less than anticipated, the effect of the merger on Ahold Delhaize's ability to retain customers,retain and hire key personnel, attract employees who are integral to the success of the business and maintain relationships with suppliers, and on their operating results and businesses generally, litigation relating to the merger, the effect of general economic or political conditions, Ahold Delhaize’s business and IT continuity, collective bargaining, distinctiveness, competitive advantage and economic conditions; information security, legislative and regulatory environment and litigation risks and product safety, pension plan funding, strategic projects, sustainable retailing, insurance and unforeseen tax liabilities and other factors as discussed in Ahold's and Delhaize's public filings and other disclosures.

The foregoing list of factors is not exhaustive. Investors and shareholders are cautioned not to place undue reliance on such statements. Forward-looking statements speak only as of the date they are made.  Ahold Delhaize does not assume any obligation to update any public information or forward-looking statement in this communication to reflect events or circumstances after the date of this communication, except as may be required by applicable laws.

Ahold Delhaize Q2 2016 Interim Report / PDF 971KB Ahold Delhaize Q2 2016 Analyst Presentation / PDF 3752KB
To make your visit of aholddelhaize.com easier and more personal, Ahold Delhaize uses cookies. These cookies help us and third parties to follow your internet behavior within and possibly outside our website. By continuing to use this website you agree with this. Happy to continue? >   Read More
×